Relations between Criterion and Disney must be good, because The Grand Budapest Hotel is coming out in February. Hoping for Leave Her to Heaven, Broadcast News, Young Mr. Lincoln and so on in the near future (more likely we'll get Fantastic Mr. Fox and The Darjeeling Limited).

And the other two titles are The Ascent (woo!) and Charade (third UK BD for this...but still a good film!).
Top

Charade, again ! I guess it's a cash cow but don't Criterion have anything less multiple-times-exploited already to release ?
Top

I'll probably get Charade in some sale eventually, but am very pleased to see The Ascent.
Top

tenia wrote: ↑
Tue Nov 24, 2020 4:45 am
Charade, again ! I guess it's a cash cow but don't Criterion have anything less multiple-times-exploited already to release ?

Now, you know if history has shown us anything it is that at least 1 out of every 5 Criterion UK titles are a "That one? Really?" type of release.
Top

True enough. At least, they have the UK rights for this one and they won't have to cut it go release it !
Top

According to this post at the Blu-ray.com forum, Criterion said that they will be releasing Kagemusha in the UK. If it pans out, then Fox titles are happening, and, more importantly, as this seems to be a recent development, it might mean that the Fox freeze after the Disney takeover is thawing.
Top

Someone on Bluray.com said that the Jarmusch Soda titles are OOP. 1) Is this recent news? 2) Does this include his most recent films?
Top

FrauBlucher wrote: ↑
Sun Dec 06, 2020 11:27 am
Someone on Bluray.com said that the Jarmusch Soda titles are OOP. 1) Is this recent news? 2) Does this include his most recent films?

A Soda rep actually posted on here before, and I think it was about a Jarmusch title - don't know if they still frequent this forum (or if they're still employed by Soda), but if we can find the post, we could try messaging them.

EDIT: It's actually JamesF (who I guess may be a freelancer since he posts on Arrow releases as well).
Top

A poster on the Blu-ray.com forum messaged Criterion about the region code of the WKW set and were told that it will be A, but that they are releasing a region B version in the UK in April.
Top

Also worth mentioning: Kagemusha is also on the way apparently ('early 2021'). So there are more Fox titles coming to the UK, which is good news.
Top

Apparently no April announcements? Usually appear on the 20-something of the month, so this is very late. Wonder if the Wong announcement is delaying it for some reason?
Top 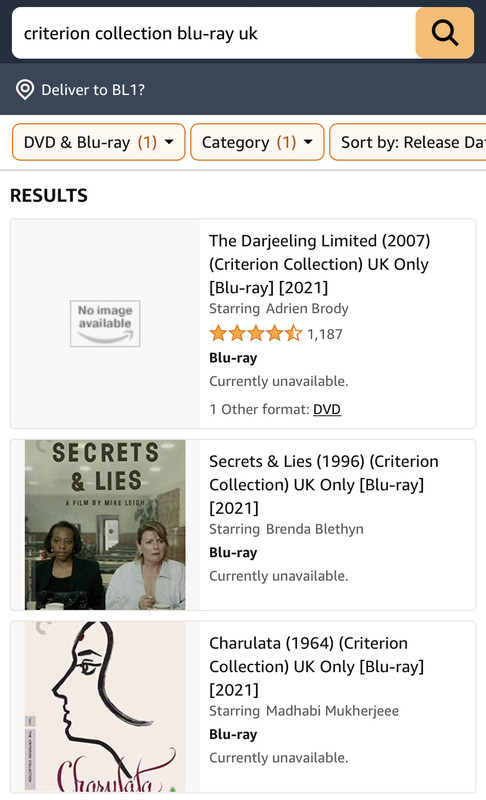 Okay, three titles already very familiar to UK boutique collectors. I think this is maybe the first month of announcements where I already own all three films, with very good transfers too (albeit barebones in the case of Artificial Eye's Charulata release). I'm sure I'm not alone on that!

That said, these announcements could indicate more Fox titles are coming perhaps (or at least Fantastic Mr. Fox, seeing as they're pushing out all the Wes Anderson titles), perhaps a deal with Film4 (who own the UK rights to Secrets & Lies; could lead to UK ports of Ghost Dog, Naked, An Angel at My Table), and perhaps more Ray titles ported over too (The Big City, The Hero).

The big question is, though, where's the Wong box set that was slated for April?

EDIT: turns out someone on BR.com got an answer directly from Criterion - it's coming in May.

FrauBlucher wrote: ↑
Sun Dec 06, 2020 11:27 am
Someone on Bluray.com said that the Jarmusch Soda titles are OOP. 1) Is this recent news? 2) Does this include his most recent films?

A Soda rep actually posted on here before, and I think it was about a Jarmusch title - don't know if they still frequent this forum (or if they're still employed by Soda), but if we can find the post, we could try messaging them.

EDIT: It's actually JamesF (who I guess may be a freelancer since he posts on Arrow releases as well).

Replying to this two-and-a-half months late (hey, I can't be everywhere at once!) to confirm that a) I left Soda/Thunderbird to work full-time at Arrow in 2018 and b) it wouldn't surprise me if Soda's releases of the early Jarmusch films were OOP now, from memory it was a relatively short license (five years, I think?) and Thunderbird has basically shuttered now, so I doubt they'd bother to renew them.
Top

A selection of titles have been discounted to £12.50 on Amazon and Zavvi, seemingly to coincide with International Women's Day next week -

2 for £25 offer begun at HMV, Amazon and Zavvi (seems Zoom is still not functioning).

Not everything included in this one though - whilst I managed to get some I wanted (Five Easy Pieces, Topsy-Turvy, Safety Last!, Mouchette) there were a few not available in this offer for no clear reason (Scorsese Shorts, Investigation of a Citizen Above Suspicion, Symbiopsychotaxiplasm, Polyester). A bit odd, but guess I'll have to wait 'til later in the year for another offer on those?
Top

'The Night of the Hunter', 'Flowers of Shanghai', and 'Merrily We Go to Hell' are being released in June.
Top

Have Arrow's UK rights expired or have Sony and Criterion UK fallen asleep at the wheel again?
Top

It's been OOP for a while from what others are saying, I've have a copy for years so I didn't notice and I'll probably replace it given the better presentation and extras on the Criterion.
Top

Hi there - pretty new to this Criterion game but this thread has helped me understand the UK situation so thank you!

I’ve got a question - essentially, is there any reliable method for gauging when a UK Criterion could become OOP? Is it a time factor? For example, It Happened One Night and Kurosawa’s Dreams were amongst the early waves of titles announced, so are they closer to becoming OOP than something recent like say Beau Travail? Or does it vary from title to title?

Or perhaps, it’ll be some time before we reach that point, given that Criterion UK only started in 2016? Please forgive me if these are juvenile questions, this is all very new to me!
Top

In theory, none should become OOP on a structural basis like a given duration of availability, because Criterion's way of working is to try and keep everything in print "forever". There are a few exceptions that are limited editions (like the Del Toro trilogy special boxset), but everything else isn't supposed to be limited.

The OOP are mostly coming from the losses of rights holding, which are usually hard to know pro-actively from a public POV.
Top
Post Reply
654 posts