Discuss DVDs and Blu-rays released by Second Run and the films on them.
Post Reply
132 posts
Message
Author

OK, could we not debate pricing here? I didn't realize Jose26's post was pushing his own eBay listing, but regardless, let's not get into a pissing match about it on the release's thread.
Top

MOD NOTE: Do not post links to your own eBay auctions anywhere on this forum
Top

Maybe it's because I've spent a fair bit of time in the relevant countries going back more than two decades, but I'm always fascinated by the way people seem happy to pay massively over the odds just so they don't have to order something directly from a central/eastern European country whose website might not be in English.

I must have placed dozens of orders over the years with multiple companies in the Czech Republic, Slovakia, Hungary, Poland, Romania and Serbia, and I've never had the slightest problem. In fact, the packaging of some of these places puts many Western outlets to shame - DVD Best in Slovakia routinely sends me stuff in boxes so thick and tightly bound that they'd reliably stop a tank.
Top

The level of buyer protections on eBay definitely make it an appealing prospect especially if you have to provide your CC info at point of sale (and PayPal isn't accepted, etc) on a strange website (not just a foreign one, mind you, but any smaller and/or unfamiliar retailer). I can understand the impulse, even though as you say, it's probably a wholly unnecessary one. But you can inform eBay about an issue with something not arriving or arriving incorrectly and you know you're getting refunded, or that the issue will be remedied shortly thereafter. Same goes for Amazon's marketplace.
Top

Thanks for the tip, swo. Was going to import the Czech BD but if this is expected from CC soon, I can hold off.
Top

Gorgeous cover, obviously alluding to how much this influenced 2001: 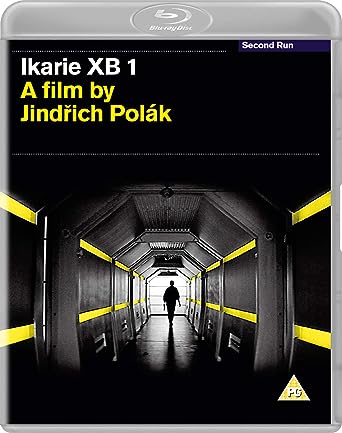 Both Stanley Kubrick and Gene Roddenberry saw it at a crucial stage of developing their own sci-fi projects, making it very possibly the most influential Czech film ever made.

And I’m delighted that they’re including the ending of Voyage to the End of the Universe, which ludicrously reconceptualises the entire film for the sake of a shock ending that’s quite out of tune with the rest of the film’s stately, measured pace.

I can’t wait to see this - to date I’ve only managed SD video versions.
Top

Second Run are so exciting now on Blu. Will definitely be buying this too.
Top

This was the only blu I picked up on a recent trip to Prague. Figured since Second Run hadn’t released it yet, perhaps Criterion might have snagged it for both US & UK and would wait for a Janus theatrical run. You’re welcome everyone.
Top

Wow, this sounds terrific. I had never heard of this one before, but just pre-ordered. First Second Run purchase, too.
Top

Mine shipped out a couple days ago. Pretty excited to get it.
Top

"An agelessly stylish affair... remains a dramatically satisfying and gripping watch and was clearly influential on much to follow. The themes and science explored on screen were ahead of their time too and remain relevant and intriguing today. So, altogether it’s a wonderful film that stands up better than most sci-fi of its era and helped usher in the next."
David Brook at Blueprint Review
Top

"Evocative of both the latter-arriving Star Trek original TV series and Kubrick's 2001: A Space Odyssey. The Second Run 4K-restored Blu-ray transfer is very desirable to those seeking this charismatic and curious sci-fi gem in the best possible presentation."
DVD Beaver
Top

And once again Beaver manages to zero in on a shower scene...
Top

After some (still unexplained) hiatus at Amazon UK, pleased to report it's now back in stock there: https://amzn.to/2JZiwZL

It hasn’t been in stock on Amazon for quite some time. Will it be returning soon?
Top

Mine was shipped March 26th by Amazon UK and arrived last week, so it may be just a glitch where the listing does not reflect the actual inventory.

I am really looking forward to watching this one; I remember seeing it 30 or 40 years ago, with French subtitles. In my memory it sometimes gets scrambled with bits from the German TV series Spaceship Orion, alhough that one was dubbed since it was a coproduction with ORTF.

It might have been interesting to compare it to the Lem novel, but like a good chunk of his early work it was not translated in either English of French (and I never felt compelled to track down the German edition). If it is at the same level as the contemporaneous Eden, it may not be a great loss and the movie was most probably a great improvement on it.
Top
Post Reply
132 posts