The first is The Horror of Party Beach.
Top

I am very interested in seeing it, thanks!
Top

The second one is Ten Dark Women (1961) by Kon Ichikawa.
Top

Great, thanks! I'll be checking out both of these.
Top

I hope this is the right thread.

Gemini itself is filled with lots of tributes to classic film noir, so I expect this to be one too....but I don’t know the movie (or even the actors). Any ideas?
Top

Gemini itself is filled with lots of tributes to classic film noir, so I expect this to be one too....but I don’t know the movie (or even the actors). Any ideas?

Yes, it's a film noir. The film is Behind Green Lights (1946) by Otto Brower. The older actor you see sitting down in the first and second picture is Don Beddoe. The guy in the third and last picture is William Gargan. The film also stars Carole Landis, who committed suicide just two years later.
Last edited by Mothravka on Fri Oct 26, 2018 7:10 pm, edited 1 time in total.
Top

Bless your heart, thank you!
Top

I have been thinking about a French film an its director. I think it was made in the 90s or early 2000s. I remember it being set in a tram and different passengers are having monologues or talks. It had a bit of late Godard feeling. The director was gay and i think he died to early.

Does this ring any bells?

Thanks domino but that is not the one.

I remember it having mostly monologues,no plot and on a city tram
Top

I got some help from a friend and the film ”Les passagers” by Jean-Claude Guiguet and its from 1999.
Top

I've never heard of it before, but now I really want to see it:

SYNOPSIS: The thoughts and dreams of a group of people riding a subway in Paris provides the springboard for Jean-Claude Guiguet's drama Les Passagers/The Passengers. As the train rolls along, various characters either talk among themselves or address the camera on a variety of subjects. A mathematician (Bruno Putzulu) speaks with one of his students (Stephane Rideau) about the statistical implications of the spread of AIDS. A nurse (Fabienne Babe) meets with a security guard she's infatuated with (Philippe Garziano), while her friend enjoys a daydream about the joys of life as a rural housewife. A man rants about problems with sex and the virtues of masturbation, while another person debates the relative merits of the films Savage Nights and The Mother and The Whore.
Top

This DVD is the only release I can find. A bit too pricey for me, even if it's very intriguing.
Top

Identify This Movie It's NOT Desert Legion w Alan Ladd

I saw an afternoon movie in the 70's and have been trying to find it ever since. I was pretty sure that Alan Ladd was the star and I narrowed the movie down to "Desert Legion". Finally saw that movie and it's the wrong one. I can't remember if it was color or bw. I was sure it had something to do with the French Foreign Legion, but I was also sure Alan Ladd was in it.

The scene I remember: There was a long procession walking up a sand dune, the star was in the front near the top, the starlet was at the back end. She started to fall down the dune, and the star ran and jumped from the top (I'm sure my brain has exaggerated the scene over the years, but he flew through the air over the row of soldiers? heads and landed 100 feet down near the bottom.

This would be the best xmas gift this year, if I can find the name of this movie.
Top

It seems like Ladd made a lot of war films. Have you gone through the Wiki plot summary of each of them? The Red Beret had them landing in North Africa, but I looked quick through youtube and I didn't see such a scene.
Top

Desert Legion is also the only Ladd movie in this list of films featuring the Foreign Legion (unless he played a secondary role).
Top

There's a movie I saw in my early teens that left a vivid impression, in the sense that I have a very clear memory of many of its details. It's probably a terrible movie, and I have no interest in seeing it again, but I'm curious to know what it was.

- it's set in Italy, Greece, or Sicily between the wars, I assume: it's an arid locale, in a time and place where Communists and black-shirted Fascists co-exist.
- the movie begins with a Black Shirt attempting to sexually assault a widow in black. He makes the vile comment "It's better when it hurts a little". A bearded, slightly corpulent, middle-aged man intervenes. We later learn he's the local Communist.
- it's subsequently revealed in flashback that the Black Shirt above had assassinated the widow's husband at their home, causing her to have a miscarriage.
- a gang of black shirts attack the Communist and force a pint of castor oil down his throat, giving him diarrhea, in retaliation for his intervention
- the well off, middle-aged Communist lives with his aged mother, very much under her thumb. When she corrects his manners at the dinner table, he loses his temper, and dumps his spaghetti all over himself in protest. She's serenely unmoved by his tantrum.
- the widow's brother-in-law comes over from America, to find out what happened to his brother, and exact revenge.
- the brother-in-law stays is staying with the widow. He spies her making a surreptitious visit to a neighbour, and leaps to the conclusion it's an assignation. He throws money at her, accusing her of prostitution, and rapes her. After he's raped her, she tearfully explains that she was in fact performing an abortion. He's filled with remorse.
- toward the end of the film there's a showdown in an ancient amphitheater. The brother-in-law is talking to the black-shirted murderer. He's going to kill him, but he's gauging the situation, deciding what his move will be. But the bungling Communist comes charging in with a revolver, and shoots the Black Shirt.
- at the end, both men are attempting to flee by train, but they are both shot down in the train station. The film ends with the widow weeping over them, assuring both of them that she loves them. In fact she may be with child, and assures each of them the baby is his.
Top

If I'm remembering this right, I think you're describing Lina Wertmuller's 1979 film
Blood Feud with Sophia Loren and Marcello Mastroianni. I've only seen the film
in a truncated English dub that was pretty lousy.
Top

Thanks! That's it. As soon as you mentioned Sophia Loren and Marcello Mastraianni, I thought, 'no, that doesn't sound right', but looking at some stills on IMDb I recognize it. I saw it in the theater, and I believe it was a subtitled version.
Top

Any help with These Citizen Kane photos?

So to make a long story short, I have a business that buys and sells items.

Just had these Citizen Kane photos come in from an old estate. From what I've seen so far, one of the people in the estate may have either really been into film or perhaps worked in film in California. These pieces were cataloged around 1970 or so, so I expect them to be older than that.

ALSO, have these story board looking items from Truffaut's Les Mistons.

I have never seen anything like the Kane photos. They are basically numbered and in order which gives you the whole film in photo form. 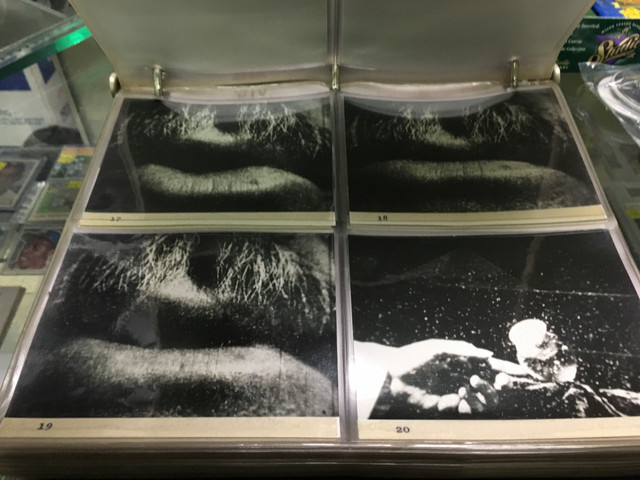 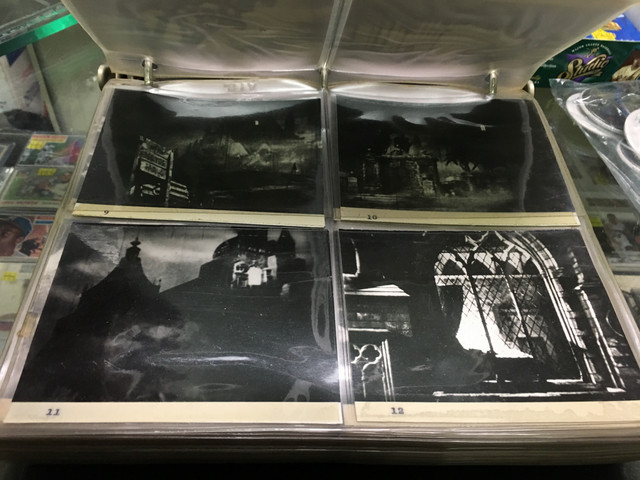 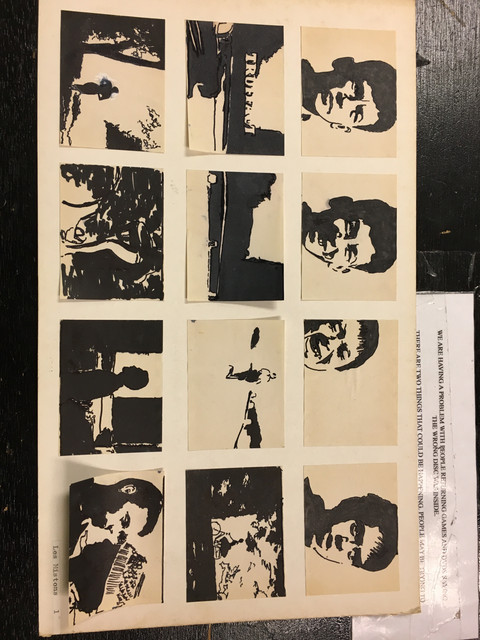 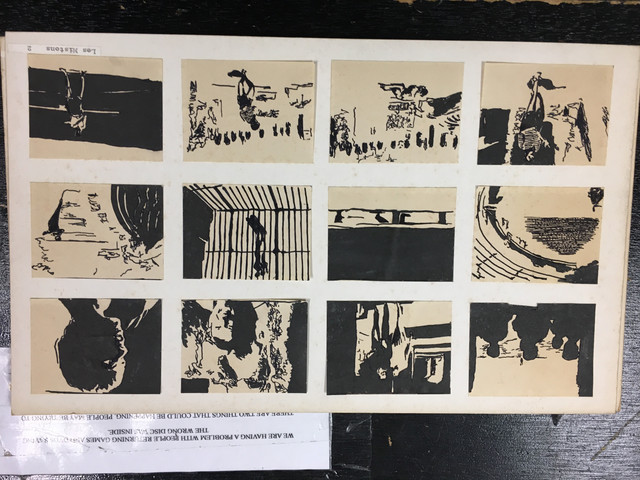 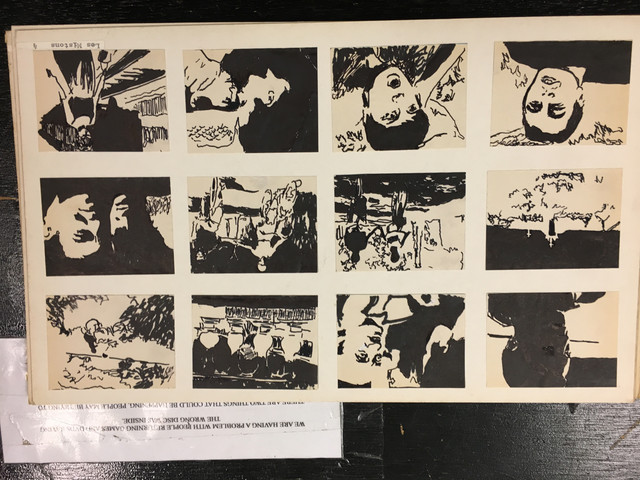 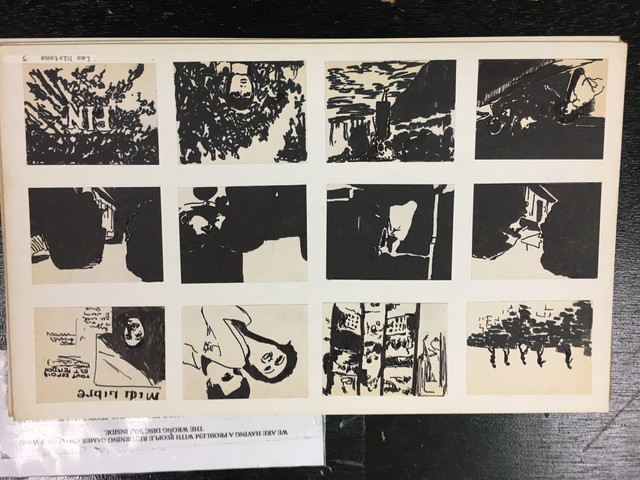 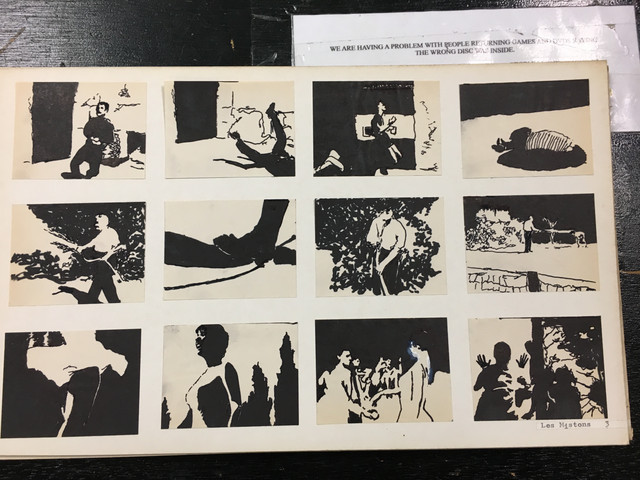 
Any Info, feel free to message me or post below!
thanks!
Top

The first looks like they possibly came from photobook collections of frames. There used to be a market for these in the days before movies on TV and home video, wherein one could rent or buy the book and "see" the film in print
Top

domino harvey wrote: ↑
Wed Feb 06, 2019 10:41 pm
The first looks like they possibly came from photobook collections of frames. There used to be a market for these in the days before movies on TV and home video, wherein one could rent or buy the book and "see" the film in print

I've never seen such a book done on Kane and the internet doesn't offer any indication that one was ever published. There is "The Citizen Kane Book" published in 1971 which features numerous frame enlargements, but no more than fifty overall. Perhaps these frame enlargements were prepared for that book and then winnowed down for the actual publication. They may have also been printed with the idea of creating a "photobook" of the film that never interested any publisher or for some kind of academic use.

How many frame enlargements are there? Going by the provided photos, the enlargement numbered "20" corresponds roughly to the two-and-a-half minute mark in the film. Unless the ratio of stills to the film's running length grows smaller, there would be over a thousand photos!
Top

Interesting. Since Welles' early style relied more on long single master takes to cover entire scenes, I imagine many of the scenes are represented by just one or two frame enlargements. According to a computer program, Kane has a total of 617 individual shots which is quite low for a feature film.
Top
Post Reply
1311 posts