Discuss DVDs and Blu-rays released by Criterion and the films on them. If it's got a spine number, it's in here. Threads may contain spoilers.
Post Reply
13 posts • Page 1 of 1
Message
Author 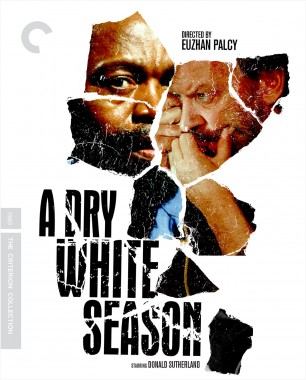 With this bracing drama, made at the climax of the anti-apartheid movement, director Euzhan Palcy issued a devastating indictment of South Africa's racist government—and made history in the process, becoming the first black woman to direct a Hollywood studio film. White schoolteacher Ben Du Toit (Donald Sutherland) lives in Johannesburg and remains blissfully incurious about the lives of his black countrymen until a wave of brutal repression comes crashing down on his gardener (Winston Ntshona), bringing Du Toit face-to-face with harsh political realities. Based on a celebrated novel by André Brink and rooted in the first-hand research the Martinican Palcy did in South Africa into the way black people lived under apartheid, A Dry White Season is unflinching in its depiction of violence and its chronicling of injustice, making for a galvanizing tribute to those willing to sacrifice everything to fight oppression.

Why does Criterion's writeup glaringly leave out the only reason anyone remembers this movie: Marlon Brando?
Top

I've never seen this, but it looks like a very solid set of extras; does it have a bad reputation?
Top

It has quite a cast further down the list too, with Susan Sarandon (her second Criterion film in a year), Janet Suzman and the great Zakes Mokae!

Sadly according to imdb Winston Ntshona only just died on 2nd August this year.
Top

That's seriously the only thing i remember about this film. He has a small role as a lawyer, i think?
Top

If Criterion wants to get fat off of the piously-humanitarian films teat, why don't they release an underexposed film that's actually supposed to be good, like Chris Menges' A World Apart? This release is totally out of left field, to me anyway.
Top

They've legitimately made an effort---in addition to the effort they were already making---to include more female directors in the collection since Peter Becker unnecessarily responded to that Movie Mezzanine article decrying a lack of female directors in the Collection, presupposing that this wasn't something Criterion wasn't already working on.

Since 2017, they've released Cameraperson, Certain Women, The Lure, Desert Hearts, and Smithereens, going out of their way for a lot of those films, with Wanda, One Sings, the Other Doesn't, and likely Let the Sunshine In on the immediate horizon.

I haven't seen the film, but I imagine that's where Criterion is coming from, especially given the film's historicity.
Top

Randall Maysin wrote:If Criterion wants to get fat off of the piously-humanitarian films teat, why don't they release an underexposed film that's actually supposed to be good, like Chris Menges' A World Apart? This release is totally out of left field, to me anyway.

I don’t recall A World Apart being noticeably better than this. And totally-out-of-left-field releases are a good thing, surely?
Top

I was really waiting for this and your responses to it!

I couldn't stop myself.
Top

Competent, obvious activist film from the apartheid era, spelling out for us all in blood that apartheid is an evil institution. Were American audiences in 1989 really as callow and ignorant as this film assumed them to be?

Everybody’s heart is in the right place, but that’s not enough to make this film more than an awkward curio at this vast distance.

The surprising saving grace of the film for me was Marlon Brando, whose brief performance has more eccentric life in it than anything else in the film. For the rest of it I killed time ranking the South African accents, which are all over the place. Helpfully, the more exaggerated the accent, the more evil the character is, so I had no trouble following who the goodies and baddies were.

The extras are unsurprisingly uncritical, and Palcy is so self-aggrandizing in her extended interview that I started to discount the film’s actual, modest achievements. Everybody seems to agree that Sugar Cane Alley is a great film (and I recall liking it way back when), and I’d much rather have seen that get the Criterion treatment.
Top
Post Reply
13 posts • Page 1 of 1