I'm finally ready to buy an all region player and it seems as though I'm gonna have to do this online. What should I be looking for in a player? I'm hoping that this will become my primary player. I'm thinking of buying from Hkflix, is this a good choice?
Top

If you're considering a Malata, the two I ordered from eBay shipped out of Canada. I've also ordered a couple from HKflix. Either way works.
Top

This is the player I'm thinking of getting. Do you know if the Malata's can handle DVDR or DVDRW. It doesn't list those formats as being compatable but I'm under the impression that most players can play DVDR.
Top

There is a Phillips 642 DVD player that can play almost anything. It is sold at Amazon.com, but you can find it also in every Wal-Mart, K-Mart and other electronic retailers. Here is the link to the one at Amazon.
Top

I play DVD-Rs on my malata daily. Yes. If I recall DVD-RWs work as well. Just keep in mind that Malata's can be a bit "glitchy". I'm using the Malata DVP-558 (one of the later models) in the living room. After a couple plays the display on the front panel turns to gibberish. Replug it in and display works again. I don't really care. In the projector room I have the 520 and haven't had a problem with it yet and that has had daily play for almost three years now. Unfortunately the 558 doesn't have the incremental zoom out like the 520. I should swap the two players...but...I'm married and the 558 matches the silver Sony TV in the living room. I also bought one of the mini Malata's that don't have display but only used it a couple times before leaving it with the folks so can't tell you how it stands in the long run.
Top

Does any player other than Malata have the incremental zoom feature? (I am afraid to invest in Malata for two reasons. It cannot be serviced easily if something goes wrong, and people have said it is "glitchy")
Top

I've got a Toshiba SD3900 and a Philips DVP642. While the DVP642 is a very handy player to have around for various internet video playback (I love it for this reason), I find DVD playback itself, from a picture quality standpoint, is less than stellar. Many movies seem to have a slightly pixelated look to them.

The SD3900 can be made region-free with a firmware upgrade, and has much better picture quality for DVDs. It will also play VCDs and SVCDs.

For a comprehensive list of DVD players that you can search according to their various features, try www.videohelp.com. There are extensive user reviews for most of the major contenders.
Top

Yes, I've raved about my Toshiba SD3900 elsewhere here and on the previous forum. For some reason my remote died recently, but my SD4900 (same easy multi-region hack) remote has taken its place just fine. I'd love incremental zoom, but hey, I'll live, my TV overscan isn't as bad as I've seen some films projected.
Top

ben d banana wrote:Yes, I've raved about my Toshiba SD3900 elsewhere here and on the previous forum. For some reason my remote died recently, but my SD4900 (same easy multi-region hack) remote has taken its place just fine. I'd love incremental zoom, but hey, I'll live, my TV overscan isn't as bad as I've seen some films projected.

The only problem I've had with it, is that the branching on the new Iron Giant SE screws with it. The player does a quick stutter at the location of each branch. Annoying.

My only real complaint is that the player doesn't show remaining time, which is a feature I used all the time on my previous player.
Top

I'm getting a new computer, and I'm looking into what DVD-ROM drive to get for it. My two criteria for the drive are (1) ease of hacking to play DVDs from different regions and (2) reliability. Does anyone here have a drive that they bought in the last couple of years that they had no difficulting hacking (flashing the firmware, etc.) that they might recommend? My Toshiba DVD-ROM drive (now 5 years old) I never managed to successfully hack.
Top

I've got a JVC. The problem with mine is if I scan forward, the images start to look all weird. Kind of like if the image was recorded off a tv.
Top

My wife speaks Cantonese and is talking with some people for DVDBeaver to obtain a number of Malata 393a Region-Free machines for us to sell. I've owned mine for over a year and it is a tank... reviewed here

Biggest drawback is that is does not have incremental zoom.

Please stay tuned to DVD Beaver if you are keen to own one. I'll sell as cheaply as I can... I'm buying a second one as a backup for myself.
Top

ecost.com has a yamakawa all region player for $39 after rebates (look under bargain countdown). It has been a pretty decent player for me - the PAL to NTSC conversion is not the greatest, but I have a TV that does both so it is not an issue for me.
Top

I just got my first region free player the other day, the JVC XV-N410-B. Picked it up for about $130.00. So far I've played some episodes of Spaced & some episodes of Nick Frost's Danger: 50,000 Volts and so far, no problems with PAL conversion. I'm already thinking about another player for the other TV in the house.
Top

Just to keep informed. DVDBeaver has now sold 17 Malata 393a Region-Free machines at $85 US and are temporarily sold out. I'll try to get more next week. This is the same machine that was sold on HKFlix for $145 US (and sold out). For over 2 years it has played everything I have ever put in it straight out of the box (NTSC, PAL, every brand of DVD-R etc.). It works in all voltages around the world (110, 220 - Europe, US, Australia etc.) and is the smallest stand alone DVD Player I know of. 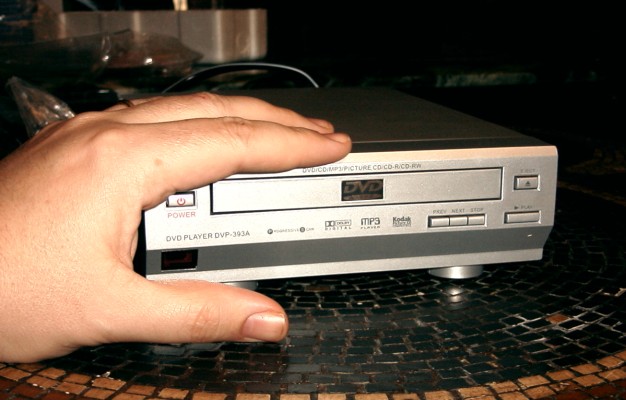 Beware there are some refurbished 393's and 398a's that are being passed off as Region Free. They probably work okay after being 'hacked' but I have no knowledge of their longevity.

Does anyone have experience with Malata Diva 2 DVD player/recorder? It is expensive, but it seems to meet 3 criteria: It has the zoom feature to take care of the overscan problem; it can record DVDs in virtually all formats; and it is code-free. If someone can vouch for its quality (including durability), I would seriously consider it.
Top

This review provides much useful information, most of it discouraging, about the Malata Diva 2.
Top

In anticipation of it I have been going WILD acquiring quite a number of dvds...the recent Man With No Name series of remasters/reissues and A Fist Full of Dynamite, Battle on the River Plate, Pickpocket, Weekend, Drums Along The Mohawk, Salo, The Chelsea Girls, What's New Pussycat?, Dragonwick, A Tree Grows in Brooklyn, Wild River, 10 Rillington Place, Tiger Bay, Johnny Guitar, Man of the West, The African Queen, just about EVERYTHING interesting that I can pick up...CAN"T WAIT !!!!
Top

Jun-Dai wrote:I'm getting a new computer, and I'm looking into what DVD-ROM drive to get for it. My two criteria for the drive are (1) ease of hacking to play DVDs from different regions and (2) reliability. Does anyone here have a drive that they bought in the last couple of years that they had no difficulting hacking (flashing the firmware, etc.) that they might recommend? My Toshiba DVD-ROM drive (now 5 years old) I never managed to successfully hack.

Sorry this isn't timely, but get an NEC 3500 DVD+-RW. You can go to slickdealz.net and possibly find a link to it for around 60. It's flawless, and there are endless websites on hacking it (including firmware flashing, which I've done to it). As of now it's the best thing going, I think...
Top

When my Cyberhome unit died, I went looking for a new machine that was region- and macrovision-free, like the CH-500, but which also included more features (like incremental zoom to correct overscan), and better overall functional integrity. I was surprised to find almost no consensus, either in on-line fora, or among well-informed friends, about the best region-free player. Some friends replied that they were ambivalent about their machines, others hated them, and all intended to purchase a new one sometime soon. None had identified an obvious make or model to replace their old players. After a full dayï¿½s research, I didnï¿½t find the perfect player either, but I found a pretty good one, and thought Iï¿½d share the information that would have saved me a lot of time and effort.

The Philips DVP 642 is widely available at stores like Target, Best Buy, Wal-Mart (grrr), etc., where it retails for $60-80. It is rendered permanently region-free by entering a code, once, on the remote, after which no further action is required to watch non-R-1 discs. (The CH-500 requires that a code be entered each time one plays such a DVD.) The Philips plays R-2 discs better than did the Cyberhome, and most, so far, have played with perfect clarity. The R-2 Carlton edition of ï¿½A Canterbury Tale,ï¿½ which was unwatchable on the CH-500, plays right well on the Phillips. The lone exception, thus far, has been the Eureka edition of ï¿½M,ï¿½ which is as marginally ï¿½pixilatedï¿½ on the new player as on the old one. The new Eureka/MoC disc of ï¿½Pitfall,ï¿½ however, plays flawlessly on the 642.

The older, macrovision-free, version of the Philips is still available in some locations. The old version is packaged in a large blue and black box, while the newer version, with macrovision, is sold in a thinner white box. Older versions have been marked on the back of the unit with a manufacture date as late as November 2004. Or so I have read, mostly at this website, which provides a pretty thorough history of this model:

The Philips doesn't, unfortunately, include incremental zoom or many other deluxe amenities, but I trust it will serve me well until the arrival of a better machine.
Top

I recently picked up a JVC 412 region free player that seems to play PAL sourced Region 2 dvds adequately save for the shows mentioned in the subject heading(in the case of Alan Partridge it would be Knowing Me, Knowing You). Each of these shows exhibit heavy amounts of wavy distortion during on screen movement and switching the picture source doesn't help(doing so makes the screen "jitter"). Anyways, the question is, does anyone own any of these and a player that plays them without the aforementioned problems?
Top

I have no problem with my Alan Partridge discs on my Toshiba SD3900.

My brother has the same player and I'm pretty sure he has Brass Eye, and I know he has the Partridge discs, and hasn't mentioned any difficulties either.
Top

I have a JVC XV-NP1SL region-free player, and it exhibits the same problems you describe when I try to watch the R2 release of The Wicker Man. But it plays the three Artificial Eye R2's I own OK, so I'm equally puzzled by this problem. (Fortunately, I also own Anchor Bay's two-disc release of Wicker Man, so I just watch the R2 for the commentary.) I don't know whether this is a problem with JVC or with whoever encoded the DVDs.

I'm glad you alerted me to this problem with the Knowing Me, Knowing You disc, as I've been wanting to pick this up for some time. I may just wait now, because I've heard fairly reliable rumors (over at the BBC America message board) that R1 releases of the Alan Partridge series are coming.
Top
Post Reply
1271 posts