This review of Shinoda's Assassination has 42 likes on Letterboxd.

Vegan points:
There's a song about not tying a horse to a tree.

Ah, the Vegan Alert woman can post literally anything and it gets a ton of interaction on there. The gimmick was (and sometimes still is) funny in its misguided earnestness, but she's a terrible reviewer.
Top

I’ve already mentioned this before, but this is the most useless part of her omnipresence— 99% of what she watches is three stars or a half star on either side. Completely useless when someone grades everything as okay
Top

From a review of American Factory:


We are a country of Hippocrates that will stay in this cycle until we start recognizing what it will take to improve our own culture.

Also in the same review:

The UAW in my opinion helped ruin the auto jobs in the US. Sure these people were quoted as making $29 / hr for GM and now make $12-$14 which needs to be fixed, but unions need to find a place where they can partner with business, rather than the constant adversarial role they play in the auto industry.

They seem to have missed how virulently anti-union the management is in the film. During some large company function, Sen. Sherrod Brown comments that the plant should unionize , and the American VP of Fuyao gets real upset, and angrily jokes that they should kill the senator (pretty much his exact words). The company spends $1M on an anti-union consulting company, and forces employees to attend mandatory and multiple anti-union meetings. Yet somehow this reviewer comes away with the idea that unions are adversarial.

One US lady summed it up well, by stating the union does not help her (a good worker) rather it protects the bad worker.

Very wrong. The union protects all workers. The good worker would very likely benefit from higher wages (just the threat of unionizing leads the company to up wages $2/hour, in an effort to thwart the union). There would be better enforcement of safety regulations. A fairer process in case of termination or injury or dispute. More job security. Etc.
Top

I posted this in the Shout Factory thread but I think it earned its place here:


"Silver Bullet" has appeared on Blu-ray before, including last year's release from Umbrella Entertainment. Shout Factory appears to use the same master, with the AVC encoded image (2.35:1 aspect ratio) presentation delivering a satisfying look at the cinematographic particulars of the picture, which tends to favor a diffused appearance, especially around werewolf attacks. Detail comes through, presenting textured costuming and monster fur, and facial surfaces retain intended wear and tear. Colors are compelling, handling period outfits with some primary heft, and greenery is appealing, preserving the small town atmosphere. Delineation is comfortable, doing well with the feature's intense nighttime activity. Source is in decent shape, lacking any major areas of damage.


The AVC encoded image (2.39:1 aspect ratio) presentation brings "Downton Abbey" to a more cinematic realm, preserving the feature's efforts to deepen screen textures. Fine detail is easily surveyed during the viewing experience, taking in the extravagance of the costuming and the weariness of close-ups, protecting subtle emotionality. Distances are dimensional, offering bigness that surrounds the titular estate. Colors retain their regality for upstairs life, with warmer hues for clothing and natural lighting, and greenery is exact. Downstairs embraces more of a black and white world, and delineation struggles at times to pick out the particulars of dense suits and dresses.

Speaking of, a Blu-ray.com user has some advice on making sure you regularly tune-up your Blu-ray discs and drive them around the block once a week

People don't buy movies just to store in a rack for umpteen years, and expect them to still play afterwards. Anything that's not being used for that long, it's going to have problems because, the internal mechanisms need to operable and in use for them for self lubrications and mobile to keep them functioning.

a Blu-Ray.com user wrote:why do they call it oven when you of in the cold food of out hot eat the food

If you make a film in which a white character sees the inherent humanity of or otherwise connects to a black character by listening to them sing, you have made a very bad movie.

To offer but one rebuttal to such an uncharitable response, remind me again how many mixed race classrooms were presented on-screen in the 50s wherein the character with the most power, sway, and popularity with his peers was black? Anyone who walks away from the film thinking it’s racist went in with their mind already made up against it
Top

Strange, I thought I posted this in the rediculous thread.

But yeah, I saw this movie and was blown away by how good and complex it was on the racial front especially in that scene where Ford is reported only to be blown away in a different direction by how stupid that comment is. It's also a fundamental misreading of that scene.
Top

But yeah, I saw this movie and was blown away by how good and complex it was on the racial front especially in that scene where Ford is reported only to be blown away in a different direction by how stupid that comment is. It's also a fundamental misreading of that scene.

People having weird opinions of the film is nothing new. I happened to see this film in the presence of Ford's son Peter. Talking to Peter about it he was more than willing to talk about the controversy this film caused because it was willing to treat Poitier's character with respect. He told me Hedda Hopper accused his father of being a communist. I imagine both men would be bothered by this review too as it apparently meant a lot to Glenn.
Top

Comment on a Blu-ray.com news story about Indicator's releases

Anytime now this label is going to release a third film that's worth seeing.

I only count one: The Mad Magician 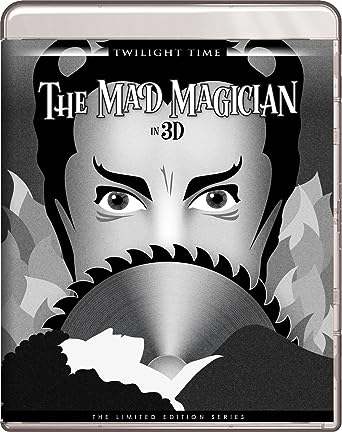 Letterboxd's top review for The Girl in the Red Velvet Swing is a beautiful case of not being able to distinguish between depictions and endorsement.
Top

And yet about half the reviews seem to think that because people are artistically illiterate.
Top

Anytime now this label is going to release a third film that's worth seeing.

Sally Jane Black wrote: The unnecessary and disturbing pedophilia subplot (which is never addressed nor commented on in any meaningful way) serves no purpose but to make the working class protagonist unlikable (thus eradicating the film's chances of ever being class conscious) and characterize a child in a sexual way. The commentary on North Korea could be argued to be unreliable, given that it comes out of the mouths of characters who are quintessential bootlickers, but since the U.S. media has almost completely drowned out alternative views on the DPRK, that unreliability is lost on most viewers. Instead, it just seems like a gross moment of chauvinism at best and chauvinistic humor at worst. The fucked up use of native peoples' cultural aesthetics (or the stereotypical portrayals thereof) is bizarre, racist, and uncommented upon by the film. Yes, it's the cruel, exploitative rich ruling class playing pretend, but the behavior is never called out within the context of the film. And in the end, two of the female characters are dead so we can watch the men angst about it--and then we don't get even that much. They become props in the drama of men, as usual.

Honestly the whole thread could be quotes from her so I don't think we need to fill it up with her nonsense.
Top

This was something that sticked out, having rewatched Parasite and reading some of the popular reviews on LB. I just wasn't aware of SJB being a tankie.
Top