Discuss DVDs and Blu-rays released by Criterion and the films on them. If it's got a spine number, it's in here. Threads may contain spoilers.
Post Reply
25 posts • Page 1 of 1
Message
Author 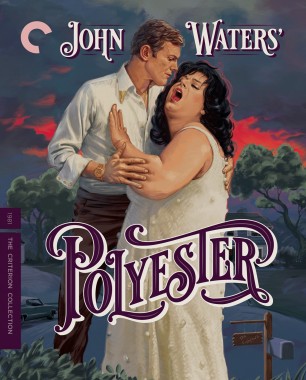 For his first studio picture, filth maestro John Waters took advantage of his biggest budget yet to allow his muse Divine to sink his teeth into a role unlike any he had played before: Baltimore housewife Francine Fishpaw, a heroine worthy of a Douglas Sirk melodrama. Blessed with a keen sense of smell and cursed with a philandering pornographer husband, a parasitic mother, and a pair of delinquent children, the long-suffering Francine turns to the bottle as her life falls apart—until deliverance appears in the form of a hunk named Todd Tomorrow (vintage heartthrob Tab Hunter). Enhanced with Odorama™ technology that enables you to scratch and sniff along with Francine, Polyester is one of Waters' most hilarious inventions, replete with stomach-churning smells, sadistic nuns, AA meetings, and foot stomping galore.

Re: Criterion and Warner Bros.

But... "Criterion’s doing Polyester next year".

Wonder if Criterion will include reproductions of the scratch-n-sniff cards.
Top

Another confirmation from John Waters about a Criterion release of Polyester in 2019.
Top

the Baltimore-based filmmaker is hoping an updated version of his Odorama card will go along with it.

Since it's doubtful we'll get a multi aspect ratio edition a la On The Waterfront (ie. unrestored original theatrical release complete with scratches & washed out image & restored version in director's "intended" ratio), that's all I need to know for preordering. Would be nice if the Criterion store would sell extra card packs for hosting a Polyester party at your house.
Top

Does anyone know if the Odorama card is completely disgusting? Or only partly?
Top

From IMDbShow
The ten smells on the gimmick Odorama scratch and sniff card featured in the film were- in the same chronological order as in the film and corresponding to the number on the scratch-and-smell card: 1. rose (i.e. a flower), 2. flatulence, 3. model airplane glue, 4. pizza, 5. gasoline from a can, 6. skunk, 7. natural gas from a gas oven, 8. leather upholstery in a new car, 9. dirty shoes (i.e. a pair of sneakers), 10. air freshener from an aerosol can.
So only like 60% unpleasant

Assuming these are one-time use only, it seems like Criterion could make a killing selling individual cards for $5-10 a pop
Top

Saw this in the cinema here a few years back with Odorama cards handed out before the screening and have to say that even the 40% quoted above that should smell pleasant did not at all to me (esp. 4 and 10). On the other hand I don't remember the others smelling that unpleasant given what I was expecting from the screen. Maybe the cards don't age well?
Top

Scratch 'n' sniff cards last a long time, you can scratch them out completely but with such unpleasant smells I doubt most people will. I have a 25 years old card that came with a video game (also mostly unpleasant stuff like sweat odor and such) doing just fine. And not that I'm against multiple cards included with the film, but a single card could do the trick, as you could scratch then pass the card along to other people while watching the film.
Top

I went to a screening of Polyester last year where they handed out used cards that were at least twenty years old. They still worked fine (in that they still smelled terrible).
Top

I have the Criterion laserdisc with the Odorama card and it still works after decades. I keep my LDs in a plastic tote box and I can smell that card every time I open the lid.
Top

The New Line DVD came with an Odorama card, so I imagine any circulating copies are from that, not the theatrical run
Top

I have the card from the DVD and have been scared for over a decade to try it. I don't think I really needed it to enjoy the film, as I assume that after a few of the circles have been scratched away all of the smells would blend together!
Top

I don't think I have the guts to actually do this but, super cool inclusion all these years later!
Top

It was in the New Line double feature DVD and still smelled years later when I sold it, so the longevity is strong so long as you just smell without actually scratching away the scent
Top

I will not be doing any such thing, but yes, I now realize it was included in prior editions of the film. Sounds awful!
Top

Just be aware that they try and bait and switch the audience a couple of times by pretending there is going to be a good smell before thrusting a dirty pair of smelly sneakers into frame!

Anyway this is brilliant news! It has perhaps Jean Hill's finest moment teaching a bunch of young hooligans a lesson! (Although the opening of Desperate Living might be slightly better!)
Top

I have the Criterion laserdisc of this, and the Odorama card still smells too. Those things are designed to last.
Top

I kept the scratch and sniff card for years after I saw the film. It did smell a bit but with all the odours combined it was more of a chemical smell. I saw the film at a sold out show and I didn’t even have to scratch mine, with the combined scratching by the audience every smell filled up the auditorium.

The film itself is my second favourite John Waters movie after Female Trouble. It’s full of great gags and it’s fun to see his repertory company in a movie which has a more professional feel, while still not as mainstream as his later comedies.
Top

It may also be worth nothing that Vinegar Syndrome have just released the Tab Hunter and Divine re-teaming from 1984 directed by Paul Bartel, Lust In The Dust, on Blu-ray. Here's the Mondo Digital review
Top

It’s a couple of weeks old, but here’s a typically delightful interview with Waters in Vulture


When you cast Tab Hunter in Polyester, was part of the joke that he was known to be gay?

There was no joke in me hiring Tab Hunter. I would steer clear of that. Was part of the reason I collected him because of his image as a dreamboat Hollywood ’50s star, that we were parodying sort of a genre? Yes. You know, I knew probably that he was gay. I certainly didn’t know that he was a Republican, which he was until the day he died. He used to torture me with that. But there was no joke.

I saw a DCP of the 4K restoration when it opened at IFC (with Criterion staff in the audience). Waters and Ken King were there, and it was absolutely wonderful. They re-created the Odorama cards and the picture looked glorious. I missed the DVDBeaver review so I wasn't aware of any "teal" that may have been added, but it wasn't egregious. I never saw this film before so it was a hilarious surprise.

Waters had wonderful anecdotes, but he also gave King a lot to say too. (Re: that interview posted upthread, Waters added that Hunter teased him with "I voted for Trump" up until he died.)

Someone asked if he had any plans to do more reissues with Criterion, and he said it was up to them, not him, adding that it probably depends on how well these do.
Top

Criticizing a John Waters film for the performances (not to mention looking "cheap and tacky") is the epitome of not getting it.
Top

The smoking PSA included in the disc (which was added at some later point to the specs since it’s not listed in the first post) still runs before every film shown at the Charles Theatre in Baltimore, by the way
Top
Post Reply
25 posts • Page 1 of 1