Discuss DVDs and Blu-rays released by Criterion and the films on them. If it's got a spine number, it's in here. Threads may contain spoilers.
Post Reply
299 posts
Message
Author 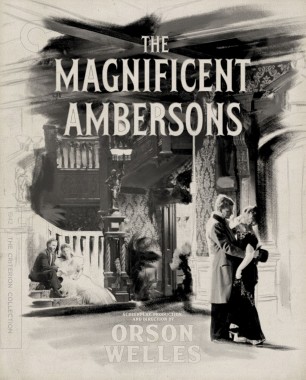 Orson Welles's beautiful, nostalgia-suffused second feature—the subject of one of cinema's greatest missing-footage tragedies—harks back to turn-of-the-twentieth-century Indianapolis, chronicling the inexorable decline of the fortunes of an affluent family. Adapted from an acclaimed Booth Tarkington novel and characterized by restlessly inventive camera work and powerful performances from a cast including Joseph Cotten, Tim Holt, and Agnes Moorehead, the film traces the rifts deepening within the Amberson clan—at the same time as the forces of progress begin to transform the city they once ruled. Though RKO excised over forty minutes of footage, now lost to history, and added an incongruously upbeat ending, The Magnificent Ambersons is an emotionally rich family saga and a masterful elegy for a bygone chapter of American life.

• New 4K digital restoration, with uncompressed monaural soundtrack on the Blu-ray
• Two audio commentaries, featuring film scholars Robert Carringer and James Naremore and critic Jonathan Rosenbaum
• New interviews with scholars Simon Callow and Joseph McBride
• New video essay on the film's cinematographers by scholar François Thomas
• New video essay on the film's score by scholar Christopher Husted
• Welles on The Dick Cavett Show in 1970
• Segment from Pampered Youth, a 1925 silent adaptation of The Magnificent Ambersons
• Audio from a 1979 AFI symposium on Welles
• Two Mercury Theatre radio plays: Seventeen (1938), an adaptation of another Booth Tarkington novel by Welles, and The Magnificent Ambersons (1939)
• Trailer
• PLUS: An essay by critic Molly Haskell and (Blu-ray only) essays by authors and critics Luc Sante, Geoffrey O'Brien, Farran Smith Nehme, and Jonathan Lethem, and excerpts from an unfinished 1982 memoir by Welles
Top

ByMarkClark.com wrote: ↑
Fri Oct 07, 2005 2:29 pm
I thought I had read where Warner was working on a long-overdue SE of THE MAGNIFICENT AMBERSONS, but I don't see any mention of it on the "Forthcoming Titles" thread. Was I hallucinating?

In the March 2005 Warner Chat at HTF, the following was revealed:

[JeffWilson] Thanks; about THE MAGNIFICENT AMBERSONS, any update on the status for this? Last I heard you were looking for better elements? Also, any plans for JOURNEY INTO FEAR (1943)?

So nothing definite at this time ...
Top

.....i thought i did read somewhere that the film elements to The Magnificent Ambersons were in excellent condition. I have the Criterion laserdisc of the movie and i thought it looked good for a 1942 movie!
Top

They version shown on TCM occasionally is also pretty decent but it could definitely use some restoration work. I wouldn't mind getting a new commentary on Warner's future disc. I'm not crazy about the one on the Criterion LD.

I was recently interested to see that the grand staircase from Amberson was used in Val Lewton's Cat People.
Top

It would be great to have a commentary on the dvd to explain the whole history of the movie and documentary would help too! It's too bad that Criterion would not have a chance to make the dvd!!
Top

I think there's reason to have confidence that Warner will have pretty decent special features, and I wouldn't rule out the chance of a documentary. Look at what they did with Kane.
Top

Your are right....Warner Bros. did an excellent job on Citizen Kane so i hope they do the same to Ambersons even if Ambersons is not as popular a film as Kane.
Top

I'd like a basic representation of the film, then I'd like a version where everytime there are scenes missing the film is stopped and the scenes are described to us ala Metropolis. Not a entertaining way of seeing it, but for educational sake, something that helps put the story in better perspective.

In fact, forget that, find the damned preview print and restore them. Please Lord, let them be found.
Top

If you want the best resource available for this film, you might consider Robert L. Carringer's The Magnificent Ambersons: A Reconstruction, an invaluable book for anyone interested in this film. There is also V.F. Perkins' BFI monograph.
Last edited by kinjitsu on Sun Aug 10, 2008 12:39 pm, edited 2 times in total.
Top

There's also an appendix from Jonathan Rosenbaum in THIS IS ORSON WELLES detailing the differences...

Any word on this? I know it's been mentioned in some of the HTF Warner chats as being due this year, but I haven't heard anything specific.

So what's going on with it? Will it be like the silents where they keep getting promised, but never delivered?
Top

Honestly, I think someone is banking on the destroyed footage being found. That's got to be the only explanation. Good luck on that...
Top

Every day I wake up and hope and pray for some indication of the Magnificent Ambersons coming to DVD in the near future, and day after day I lay my head down and close my eyes to sleep and am no better off than the day before. When, Lord, WHEN is it going to be time?!?!?!
Top

As I mentioned in another thread on Welles, Beatrice Welles had sued Turner Entertainment a few years ago, claiming she owned the rights to AMBERSONS. That was only cleared up recently, with Turner retaining their rights, so the film should be clear to release, unless other snags have gotten in the way.
Top

Well, that's good to know. I've heard rumors of dubious origin, that the original print has been found in Brazil, and that's what is causing the delay.

But if it's simply a rights issue that has now been resolved I will gladly accept the 89 minute restored version.
Top

if this were truly the case, then this would be the biggest film news in years, or possibly decades. the original (2+ hour cut) is the holy grail for film fanatics and archivists... but like the grail, it probably doesn't exist (anymore).
Top

We'll get the original cut of Ambersons the day they grow asparagus on Mars.
Top

I once asked Rick Jewell (author of the RKO story) about Ambersons, and he told me he'd seen the shipping manifests that had the cans sent out to be dumped in the middle of LA harbor when researching the film. so either a zealous vault person (who somehow foresaw Welles' future reverence and didn't care if they lost their job or not) replaced the film with something else and put it in a can or unmarked can it didn't belong in or all the materials the studio wanted cut and had in their possession are lost. The only other realistic possibility is Robert Wise risked his job to preserve a personal copy of his first cut, but I think we would have heard of that before now if he had done so, probably around the time of the Lawrence of Arabia restoration. Or he sent a copy of his cut to Brazil for Orson Welles to view and give notes on. and that copy has survived somehow today.

none of these survival scenarios are very likely to result in an extant copy of Wise's rough cut of the film. but the possibility is there. I imagine the delay has to do with the rights issues mentioned above as well as searching worldwide for the best surviving prints, hoping to discover a King Kong or Kane esque pristine version in some asylum or suchlike.
Top

Warner have said it's coming this year in a HTF chat, along with Journey into Fear (which will include both versions). There's no holdup, just preparation time. The delay seems to have been to get the best possible version of Ambersons they can, so I'm half-expecting a Blu-ray edition as well.
Top

miless wrote:if this were truly the case, then this would be the biggest film news in years, or possibly decades. the original (2+ hour cut) is the holy grail for film fanatics and archivists... but like the grail, it probably doesn't exist (anymore).

That's what they said about Metropolis...
Top

but Metropolis was actually premiered with its long cut.
Ambersons was still in editing when hacked to pieces.
Top

miless wrote:but Metropolis was actually premiered with its long cut.
Ambersons was still in editing when hacked to pieces.

This is correct, as movielocke has already laid out. Indeed, Bogdonavich has even gone down to Brazil in a vain attempt to locate the editing print that was sent to Welles while he was working on It's All True. Believe me, unless Warner's got it, it ain't turning up. And they don't, so it won't. Sadly. I'll be happy to eat my shoe though if I'm wrong.
Top

The discovery of Ambersons elements would be impossible to keep secret-- that missing footage is by far the most sought after film in history and someone in the chain would excitedly leak the information before a DVD release broke the news.
Top

domino harvey wrote:The discovery of Ambersons elements would be impossible to keep secret-- that missing footage is by far the most sought after film in history and someone in the chain would excitedly leak the information before a DVD release broke the news.

This sudden upsurge in speculation about the lost reels of Ambersons and Metropolis makes me wonder what 125100 is up to these days. 8-)
Top

And I bet Warners is sitting on Convention City too.
Top
Post Reply
299 posts