Discuss DVDs and Blu-rays released from Arrow and the films on them.

I just watched The Bicycle Thieves a few nights ago, and I thought it looked fantastic in motion. Some really great supplements on the disc. I don't have the booklet yet, but I'm looking forward to the whole package.
Top

The Digital Fix on Bicycle Thieves:


The transfer has come courtesy of a restoration from the original negative and whilst not spotless, debris and dust on the image are rare, the contrast has not been overboosted and whilst edges seem sharper than previous home entertainment releases they avoid haloing. Generally, this is a good transfer where fidelity to the source is respected.

I hope this hasn't already been covered elsewhere, is the new blu-ray edition any different from the previous one, or just a repackaging?
Top 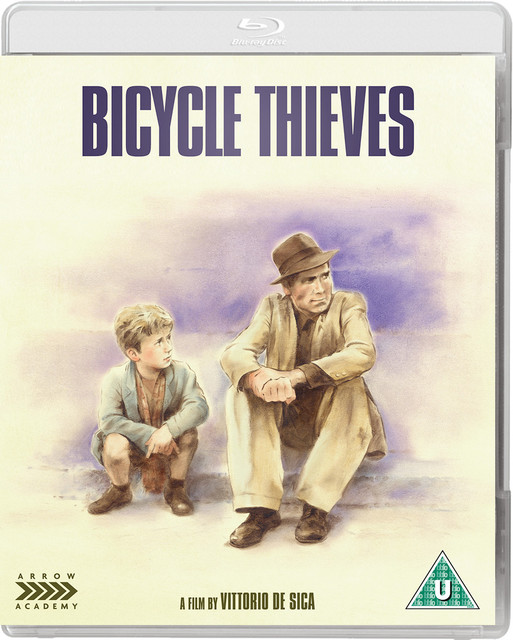 Heralded as the greatest film ever made on release, winning an Oscar in 1949 and topping the Sight & Sound film poll in 1952, De Sica’s seminal work of Italian neorealism has had an impact on cinema worldwide from release to the present day, with filmmakers such as Satyajit Ray and Ken Loach claiming the film as a direct influence on their own.

Bicycle Thieves tells the story of Antonio, a long unemployed man who finally finds employment putting up cinema posters for which he needs a bicycle. His wife pawns all the family linen to redeem the already pawned bicycle and for Antonio salvation has come, until the bicycle is stolen. Antonio and his son take to the streets in a desperate search to find the bicycle. Bicycle Thieves is as much about the position of Italians in post-War, post-Fascist Italy as the relationship between father and son, told through the labyrinth of the cinematic city with De Sica’s arresting visual poetry.

Defining neorealism, a small period of filmmaking that focused on simple, humanist stories, Bicycle Thieves was one of the most captivating and moving. Now presented in a new 4K restoration from the original camera negative.

I thought this was the ugly covers thread
Top

No, they've double dipped on Lifeforce, City of the Living Dead and a number of Argento titles: Deep Red, Phenomena, Cat o'nine Tails, The Bird with the Crystal Plumage.
Top

It might be the first double dip of an Academy release.

Hopefully, they'll also upgrade Miracle in Milan, Ashes and Diamonds (with the rest of the trilogy) and The Conformist at some point.
Top

Nope, we have a double dip of Cinema Paradiso already!
Top

Just to be an annoying pedant, the first Cinema Paradiso BD from Arrow was from Arrow Films - Arrow Academy hadn't been launched then.
Top

Both Bicycle Thieves and Cinema Paradiso were slated to get limited theatrical releases with new 4K restorations, so I guess a new release of the latter will be announced within the next few months.
Top
Post Reply
62 posts