Is it me or did Ingmar Bergman and Ingrid Bergman work on Autumn Sonata just because their names are similar? Did that get tossed around as a joke? Just curious

I mean, they were kind of the Dylan McDermott/Dermot Mulroney of Swedish cinema.
Top

Perhaps the worst reviewer of all time wrote:Perhaps the worst director of all time. I wish I could go back to a few decades when no one knew who he was, because cinephilia is past the point of no-return. There is nothing more frustrating than when young, ignorant, impressionable fucks give into revisionism and pretend he was "great". Insults don't phase me, the only times I get mad is when somebody is unconscious of why they like something. Because the solution to their problems are right in their fucking face, and I have to baby them, I have to pamper them (me, the sole GOD that they lack).

Proceed through this person's Letterboxd entries at your own peril.
Top

Perhaps the worst reviewer of all time wrote:Perhaps the worst director of all time. I wish I could go back to a few decades when no one knew who he was, because cinephilia is past the point of no-return. There is nothing more frustrating than when young, ignorant, impressionable fucks give into revisionism and pretend he was "great". Insults don't phase me, the only times I get mad is when somebody is unconscious of why they like something. Because the solution to their problems are right in their fucking face, and I have to baby them, I have to pamper them (me, the sole GOD that they lack).

Proceed through this person's Letterboxd entries at your own peril.

"LET'S MAKE EVERYBODY A CIPHER FOR MY IMPOTENT AND FACILE PERSONALITY. YES THIS IS LIFE THIS IS REALITY.”

I'd dare say the praise is a psy-op as well. Sneaky marxists and their subversive tactics. Putting out Criterions promoting this trash as if it's the highest of art, scrounging up scrap metal to salvage themselves while doing everything in their power to ignore Griffith.

domino harvey wrote: ↑
Tue Aug 07, 2018 2:32 pm
I wrote out a whole thing but erased it after digging around some more because this is just a troll

Their ratings are absurd, they hate everything but Griffith, Flaherty, and modern populist entertainment like Tyler Perry and Michael Bay. It is intended to get a rise-- no one who hates movies this much would actually keep watching them. This is someone who knows enough to be provocative to the audience they choose
Top

They gave Teen Titans Go! to the Movies a 5-star review. Dedicated, sure, but definitely a troll.
Top 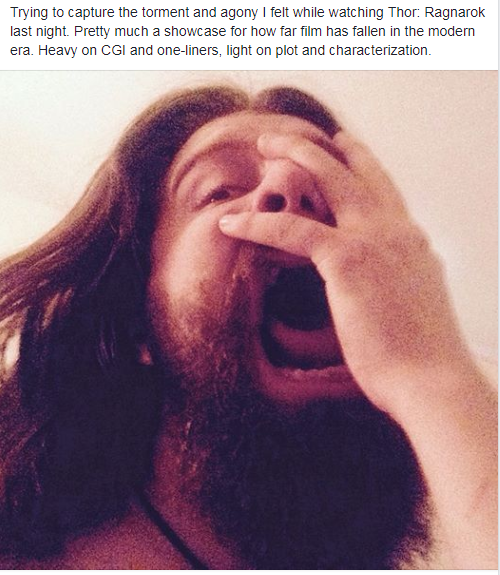 He looks like the kind of guy who wants to tell me that he chops up bibles with a katana and thinks Gamergate had nothing to do with harassing women.
Top

At last, an Oscar for popular film. Because who needs another The Shape Of Water?


Hadley Freeman wrote:Last week it looked like the Oscars had capitulated to the right, by announcing there will be a new category called outstanding achievement in popular film, AKA the We Know You Care More About Black Panther Than Whatever Won Best Picture Last Year award (it was The Shape Of Water, a title you will have forgotten again by the end of this sentence).

I haven't even seen The Shape of Water, but this seems... I don't know... disrespectful? It doesn't sit right with me.
Top

It seems totally false is what it seems. People remember The Shape of Water, even if only as "that movie where the lady has sex with a fish."
Top

Not true. People are still making jokes about having sex with fish men. Just the other day I saw a guy shitposting about a sequel where the roles are reversed.
Top

It’s my wife’s favourite film this year by a fair distance, and I haven’t forgotten it either.

But it’s not so much the inaccuracy that rankles as the arrogant assumption that her readers share her views (and ignorance). It’s the same with these “Fifty great films you’ve never even heard of!” clickbait lists - almost without exception I’ll have heard of 95% and seen 75%, often on original release (which is most likely a decade before the list compiler was born).

My own attitude is to assume that I’m always the last person to catch up with a particular title, even if I’ve just seen it literally wet from the lab (or fresh off the render queue) - which I think is far healthier.
Top

When it comes to abysmal film writing, The Guardian never disappoints.
Top

To be fair, you can't go wrong with an article whose first sentence contains a joke around Lanzmann's Shoah.
And of course, it remains quite fascinating to see that Black Panther and Wonder Woman are truly perceived as really good movies and not "junk, relying on CGI instead of quality scripts and direction", which in the end seems to be the basic fuel of the article.
As a whole, the article not only seems very comtemptuous, but it seems also to be mostly (if not entirely) missing the point : the issue with this new Oscar isn't about having more popular movies finally getting a big nom, the issue is how and why. This new category won't be a "big nom", it will be the dedicated category for blockbuster movies that might not even be worthy of a nomination, even less of a prize, but just have been popular at the BO. It will ghetto-ise these movies by putting them aside, in just ONE category, that will be in the end the kiddie version of the regular Best Movie category. It might be brushed aside, but having had in France the same discussion just last year when the Academy wanted to create a "Best popular movie" (that will end up being a way to award our popular crappy comedies and will only give the prize to the BO winner and that's it), it won't. People will remember that it's not just an Award, but that this is THIS award.

The why has to do with how the nominated movies should be nominated for their quality alone, not for how popular they might be. Sure, you can think about that if you want to keep in touch with the general audience, but why this blockbuster should be nominated over the lower-seen movie that turns out to be extremely good ? Why should you select a potentially slightly worse but more popular movie than, say, Phantom Thread ?

The article don't care about this, because it's indeed more of a superficial click-bait thing than anything.
Top

Also, how do you define a blockbuster? Thinking back to one of the rare occasions when I actually agreed with the Academy that their Best Picture really was one of the year's best films, Unforgiven debuted at $15m and went on to gross over $100m - not Black Panther levels of success, clearly, but still a very solid hit, and presumably those figures need adjusting for inflation 26 years on.

So under this new regime, would Unforgiven still be in the running for Best Picture, or would it be hived off into this new Best Popular Film category? After all, it's a major studio genre pic starring Clint Eastwood, so "popular" by definition.
Top

I've always tended to define a blockbuster by a combination of insane budget and obvious 4-quadrant / tentpole type content. I would thus not place Unforgiven in this category.
But this is of course quite subjective, especially regarding the budget : what's the threshold ? $150M ? $160M ? etc...
Top

At this point, we have no idea how the “Popular Film” criteria will be set or how the voters or public will react. I don’t think we can say what will happen with this new category.

After all, the Best Picture expansion a decade ago was supposed to let in more “popular” movies too. But it didn’t take long for the opposite to mostly happen.

Consequences are hard to predict, is what I’m saying. Maybe if this had been in place last year, serious-minded big grosser DUNKIRK gets shunted to the “Popular” category and cleans up, and gives the category public and critical legitimacy going forward. Who knows?
Top

We don't know but we can at least guess in a rather realistic manner.

For instance, we have no idea about the criteria, but if the point of this new category is to provide a clear-cut entry point for more high-grossing popular movies (in order to generate a higher interest for the ceremony from the general audience), what would be the point of mudding this up by some criteria that would prevent these precise movies to be selected ? The lower you go in the BO, the less popular the movies are, which kind of defeat the prime purpose of this Award.

And again, we've just launched in France this year in France the Audience Award, which automatically goes to the highest grossing French movie of the past year, and it went to a crappy French comedy that many have seen (hence its BO success) but the Award was handed in the complete indifference from the public. Nobody around me knew the movie won anything, despite the recent buzz about the creation the new Award (which is likely to be awarded next year to another crappy comedy fairly panned by the critics, since, well, that's the whole purpose of this award). It's even more interesting here that it certainly hasn't generated any additionnal audience or general interest for the ceremony, in a year whose big winners have been movies much more popular than the usual winners (Au revoir là haut basically is a French big budget movie, while 120BPM has been quite successful here), but still totalling 26 noms for 11 awards. Last year for instance, the biggest noms were Elle, Frantz and Ma loute, which combined sold less tickets than Au revoir là haut alone.

But these are merely open thoughts about a future situation, but it shouldn't prevent us to try and imagine the outcome !
Top

MichaelB wrote: ↑
Tue Aug 21, 2018 5:30 am
So under this new regime, would Unforgiven still be in the running for Best Picture, or would it be hived off into this new Best Popular Film category?

Films are apparently allowed to be nominated for both
Top

"Those who are unable to learn from history are doomed to repeat it."
SpoilerShow
A concise Letterboxd review of Mamma Mia, Here We Go Again.
Top

Charles Barfield is clearly wrong. The influence that Scott Walker has had in the musical world is way to big to ignore. Kind of comparing a Criterion film to a Michael Bay film.

I chuckled at the cruel irony.
Top

I've been waiting and gave up hope for any movie to come close to knocking The Dark Knight off my number 1 all time favorite movie. And I've been debating ready player for 4 months. Finally I have concluded Ready Player One has taken first place.

Well, it couldn't rightly be Ready Player 2, could it?
Top
Post Reply
4017 posts