Discuss DVDs and Blu-rays released by the BFI and the films on them.

Yes - if I remember rightly, that edition came with two versions: the Buñuel-supervised tango-plus-Wagner one, and the Kagel.
Top

Didn't the BFI once release Un Chien Andalou on VHS with a Mauricio Kagel score? Never saw/heard it myself, but I think I remember seeing ads for it in Empire Magazine or somewhere.

But Un chien andalou will still be DVD-only, right?
Top

No, it'll be 1080p, with three possible soundtracks:

1. The "original" (i.e. Buñuel-reconstructed from memories of the premiere) tango-plus-Wagner version assembled in 1960.
2. The brand new Mordant Music score mentioned above.
3. Robert Short's commentary from the old DVD, resynchronised so that it better fits the images.

Note that the transfer will be sourced from the dupe negative of the 1960 restoration, so it will still have the same issues relating to cropping and frame rates that have affected the BFI's previous video versions... but it will at least be in 1080p.
Top

Does anyone else find it hilarious that Fact Magazine calls Un chien andalou a 1960 film?
Top

Why can't BFI use the latest restoration of Filmoteca Española? They can't be asking that much for it, can they?
Top

They're obviously aware of it - especially given the recent decision to upgrade to 1080p following the initial announcement that it would be DVD-only - so there's obviously a reason.

But I'm completely outside this particular loop.
Top

Seems (according to Amazon UK) that this has been put back a week.
Top

This isn't pertinent to the BFI release, but still an interesting tidbit. I went to a Pixies concert this Saturday and the show opened with "Un Chien..." playing before the band came out to open up the set with "Debaser", afterward continuing to perform the entire Doolittle album. That opening track is an homage to the film...
Top

One of cinema history’s greatest collaborations, L’Âge d’or united the genius of Luis Buñuel and Salvador Dalí. Now this controversial masterpiece is being released by the BFI in newly mastered High Definition for the very first time, in a Dual Format Edition (containing Blu-ray and DVD versions) with extensive extra features.

Even now, more than 80 years since it was made, this uniquely savage blend of visual poetry and social commentary remains as brilliantly witty and shocking as ever. A sinister yet poignant chronicle of a couple’s struggle to consummate their frenzied desire in the face of a stream of obstacles, in the form of bourgeois society and the Church, the film was banned and vilified for many years for its subversive eroticism and furious dissection of ‘civilised’ values.

Extras include a new HD transfer of the 1960 restoration of Un Chien Andalou, Buñuel and Dalí’s provocative debut which created a scandal at its premiere. Presented here with the restoration score, based on Buñuel’s notes, the BFI has also commissioned musicmakers Mordant Music (who re-scored an array of 70s and 80s public information films and documentary shorts produced by the Central Office of Information (COI) last year for the startling BFI DVD release MisinforMation) to create an alternative soundtrack option, which is premiered on this release.

In addition to Robert Short’s fascinating filmed introduction and audio commentaries for both L’Âge d’or and Un Chien Andalou, this comprehensive release is completed by A Propósito de Buñuel – a feature-length documentary on the life and work of Luis Buñuel, by José Luis López-Linares and Javier Rioyo.

Not bad at all. The Un Chien Andalou transfer is beyond my expectation, especially.
Top

I had a quick spin through this last night, and L'Âge d'or looks absolutely magnificent - not just because of the image quality (which is way ahead of any version I've previously seen, including 35mm screenings off ropey prints), but because it's been framed at the correct 1.19:1 aspect ratio, which makes a far bigger difference than I'd have imagined. Obviously, the picture will never be pristine - the film's long history of suppression militates against that - but I can't imagine we'll see anything better for a long, long time.

I was a little concerned when I found out that Un Chien andalou had been transferred from a 16mm dupe negative of the 35mm restoration, but I needn't have worried - 16mm is broadly equivalent to 1080p anyway in terms of resolution, and it also looks far better than any previous video version (with similar caveats about unavoidable print damage). The original Buñuel-approved soundtrack also sounds much fuller than I'd ever heard it before.

(I should probably add the caveat that I may not appear to be entirely neutral here because my name's in the booklet - but that's because it contains a piece that was recycled from something I wrote for the original DVD edition at least five years ago. I had nothing to do with the creation of this new version).
Top

MichaelB wrote:I was a little concerned when I found out that Un Chien andalou had been transferred from a 16mm dupe negative of the 35mm restoration, but I needn't have worried - 16mm is broadly equivalent to 1080p anyway in terms of resolution, and it also looks far better than any previous video version (with similar caveats about unavoidable print damage).

Just curious Michael, have you seen the Filmoteca Española restoration? 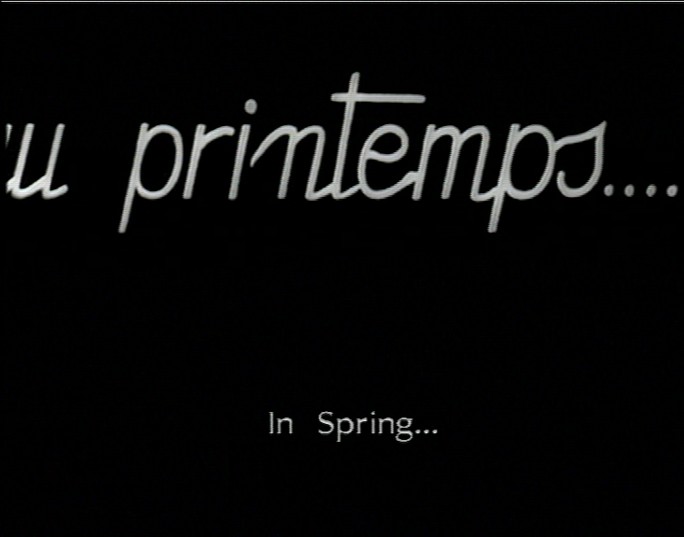 I guess DVD Beaver doesn't allow you to hotlink images. I was referring to the intertitle sample shown in the review here (not quite halfway down the page) where it says "au printemps...." or rather just "u printemps...." because the 'a' is chopped off. I believe that in the Filmoteca Española restoration, this cropping isn't present.
Top

swo17, there's more information on the left of the frame; not quite enough to make out the full "a" in "au printemps" a little under 50%.

Needless to say, the presentation - especially in 1080p - is much, much superior to the old BFI DVD edition which was likely to be the source for this release's Un Chien Andalou for sometime. As I say in the Digital Fix review linked to above the BFI were unable to use the Spanish resto, but as it is this 16mm negative from Contemporary Films is more than acceptable and does look really rather good in HD.

Additionally you can entire frame and slight black edging which should confirm that no additional cropping has occured in this case. Or at least no cropping from the materials used.
Last edited by antnield on Sat May 28, 2011 1:27 pm, edited 1 time in total.
Top

OK, here you go - still cropped at the side, but less cropped than before:

I also took the opportunity to do a whole set of matching framegrabs from the DVD, which unambiguously supports antnield's contention that the BFI's new transfer is a marked improvement on the old one - and, unsurprisingly, completely eclipses the horribly contrasty Facets version. Obviously, the 1080p version is better still - not quite as dramatically as you'd hope from the resolution upgrade, but you can certainly see more detail.

I've also done similar grabs from the new DVD of L'Âge d'or - though in this case, the 1080p version is very noticeably superior.
Top

I've posted comparison caps from the Filmoteca Española edition here. Some of the caps might not be quite the same frame (and for something like the cow on the piano, that scene is in motion with the piano being pulled away from the camera, so bear that in mind) but you should still get a pretty good idea of the differences. I don't mean to demean BFI by posting these comparisons--it sounds like they at least tried to get the Filmoteca Española transfer but couldn't get it, and I'll of course be picking up L'age d'or as soon as it comes out. But fans of Un chien andalou may still want to spring for the other edition as well.
Top

Thanks for that - I'll keep an eye out for it. But as far as I'm concerned, the BFI did the best they could with the materials that were available to them - and in any case, the main item of interest is L'Âge d'or, which looks phenomenal.

I really wish I could do Blu-ray captures, because my DVD grabs don't do it justice - though at least you can now appreciate the difference between the correct 1.19:1 aspect ratio and the previous cropped 1.33:1 one.
Top

I just received notification from Amazon that this release has been delayed again, estimated arrival now between 6/21 and 6/27.
Top

That's odd - I've had a shrinkwrapped edition since last week, so they definitely already exist.
Top

And mine was sent by Moviemail last week
Top

I also received a notification of delay - but in my case from between the 27th of June to the 5th of July.
Top

Ditto. Delayed until sometime between June 13 and June 25 in my my case.
Top

My order was dispatched from TheHut on Monday.

Return to “BFI DVDs and Blu-rays”