Discuss DVDs and Blu-rays released by the BFI and the films on them. 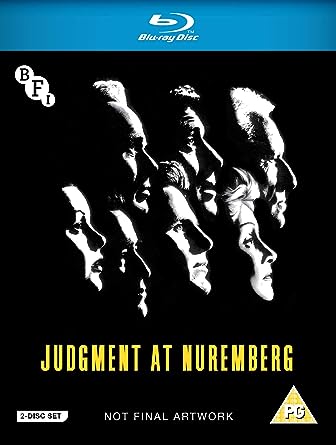 The political and moral conflicts at the core of the Nuremberg trials are brought to the fore in Stanley Kramer's celebrated dramatization,

In the aftermath of World War two, Judge Dan Haywood (Spencer Tracey) presides over the military tribunals of members of the Nazi regime. War crimes and atrocities have been committed but it is the guilt of the defendant's clear? Are the accused simply guilty of following the diktats of a superior authority? Are they pawns in a larger geo-political struggle?

Limited Edition 2-disc set (1 x Blu-ray + 1 x DVD for extras)
Presented in High Definition
In Conversation with Abby Mann and Maximillian Schell (20 mins): an enjoyable reminiscence by the pair
The Value of a Single Human Being (6 mins): screenwriter Abby Mann discusses his Oscar®-winning screenplay
A Tribute to Stanley Kramer (14 mins): an overview of aspects of director Stanley Kramer's life and career, including an interview with his widow
Other extras TBC

Re: Judgement at Nuremberg

Hey, it's the film that solved all the probelms caused by the Nazis!
Top

I've hated Stanley Kramer movies since I was a teenager, and now I'm afraid if I ever watch one again I'll actually like him.

I really hope the packaging for this release sucks so I won't be tempted.
Top

This isn’t one of his worst, though that’s still not saying much
Top

Don't forget that Signal One released On The Beach too!
Top

To be a little fair to Kramer, the film does criticize the postwar pax Americana for rehabilitating Nazi collaborators and losing sight of the justice promised after the victory. So it's not exactly Jojo Rabbit levels of complacency. Still a pretty fucking boring movie, though (with some of the most painfully fake back-projection scenes of its era!).

Surprised they couldn't get the original live TV version on here—the one where the word "gas" (as in, "gas chambers") was repeatedly muted during broadcast at the behest of the gas company sponsoring the show. Rights would be with CBS, still.
Top

On 27 January 2020 the BFI will bring it to Blu-ray for the first time in the UK with numerous special features including a newly recorded audio commentary, short films and interviews.

American judge Daniel Haywood (Spencer Tracy) presides over the trial of four German jurists accused of ‘legalising’ Nazi atrocities. As graphic accounts of sterilisation and murder unfold in the courtroom, mounting political pressure for leniency forces Haywood into making the most harrowing and difficult decision of his career.

Special features
• Newly recorded audio commentary by film historian Jim Hemphill
• The Guardian Interview: Maximilian Schell (1971, 86 mins, audio only): the actor in conversation
• A Tribute to Stanley Kramer (2004, 14 mins): a celebration of Stanley Kramer's life and career, featuring interviews with screenwriter Abby Mann and Karen Sharpe, Kramer’s widow
• The Value of a Single Human Life (2004, 6 mins): screenwriter Abby Mann discusses his Oscar-winning screenplay
• In Conversation with Abby Mann and Maximilian Schell (2004, 20 mins): the actor and writer reminisce about Stanley Kramer and working on the film
• Resistance (2008, 13 mins): the story of a group of ‘defectives’ and their lives within the walls of an institution as part of the Nazi’s Aktion-T4 – a programme of mass murder through involuntary euthanasia
• Heredity in Man (1937, 14 mins): a chilling insight into the brave new world of pre-Holocaust eugenics
• These Are the Men (1943, 12 mins): Ministry of Information propaganda short featuring narration written by poet Dylan Thomas
• Man – One Family (1946, 17 mins): a propaganda short made for the Ministry of Information by Ivor Montagu at Ealing Studios
• Berlin Air-Lift The Story of a Great Achievement (1949, 11 mins)
• Trailer
• Image gallery
• Illustrated booklet (***first pressing only***) containing an essay and a biography of Stanley Kramer by historian Jennifer Frost, a message from William Shatner, notes on the special features and film credits

Although I am specifically looking for original press documentation about the original aspect ratio of Judgment at Nuremberg for a citation in order to correct an erroneous "1.85" in IMDB and to add the verified information to Wikipedia, I'd like to ask this as a general question as well. What is the best source (hopefully Internet-accessible) for original press release information on aspect ratios of films at release time?

I was hoping Variety or AFI would have it, but apparently not. Link to citable source for original aspect ratio of Judgment at Nuremberg especially welcome.
Top

If you're using the freely-accessible reviews on Variety's website, you might want to check nearby libraries—particularly university libraries, if that's an option—for the old Variety Film Reviews hardbacks, which collected reviews as they appeared in the original print editions. For a long time Variety provided aspect ratios in their reviews, but those aren't included in the free versions online, which are only excerpts and drop much of the information (including the detailed credits and technical specs) that ran in the print issues. They make complete back issues available online as well, but only through their expensive "Variety Ultimate" service.

Boxoffice, on the other hand, has pretty comprehensive free archives on the website, and they also included aspect ratios with the feature reviews (located near the back of each issue, at least during the time period in question). Unfortunately they're not the easiest resource to use, since there's no search function and reviews often ran months before the actual release—in the case of Nuremberg nearly two months ahead of the premiere. They also gave the AR as 1.85:1, so that's not what you're looking for anyway.
Last edited by The Fanciful Norwegian on Tue Jan 28, 2020 4:11 pm, edited 1 time in total.
Top

Thank you! I guess I did correctly remember Variety as a good source of OAR, from having seen digitized versions of their pages. I'll check some reference libraries.

Your linked Boxoffice page is probably where IMDB's erroneous "1.85:1" came from. Much appreciated.
Top

What makes you think it's erroneous?
Top

DeprongMori wrote: ↑
Tue Jan 28, 2020 4:11 pm
Thank you! I guess I did correctly remember Variety as a good source of OAR, from having seen digitized versions of their pages. I'll check some reference libraries.

Strangely, the Shock Blu-ray from Australia erroneously lists the AR on the cover as “2.20:1”. The actual film inside is 1.66:1.
Top

But in an instance like this, the BFI are not choosing the AR, they are just presenting the master as they've received it, so there's no homework for them to do. If they had performed some sort of new scan and remaster, then the historical documentation would more than likely lead them to present the film as 1.85:1. Other than the original Boxoffice listing, there's really no other documentation out there.

For a long time MGM chose to present all of their UA holdings in 1.66:1 (seriously, feel free to check any post widescreen UA film you can think of). Whilst it is documentated that UA opted for 1.66:1 as their initial house ratio in 1953, after a couple of years they abandoned it for 1.85:1 like all other major studios eventually did. MGM erroneously believed that 1.66:1 was a more permanent ratio for UA than it really was.

Case in point: Some Like It Hot. Another UA film that MGM almost forever presented on home video in 1.66:1. And if the BFI licenced their old master they would no doubt too be releasing it as 1.66:1 and calling it the "original aspect ratio". But thankfully in that case, Criterion performed a new scan and remaster, taking into account the far more relevant historical information, instead of just looking at what the film was previously released as on home video, and we now have it in its true aspect ratio.

Matt wrote: ↑
Tue Jan 28, 2020 4:35 pm
I'm looking at the original Variety review from October 18, 1961 right now. There's no aspect ratio mentioned (for this or any other movie reviewed in that issue—I'm not certain that they ever included it in their reviews).

They definitely did for a time; here's an example. I'm guessing they dropped it after a point when widescreen was no longer a novelty and the various dueling ARs of the early widescreen era had consolidated down to a small handful.
Top

Because I can't let well enough alone, I also found a "Nominated for Academy Awards" feature in the April 1962 issue of American Cinematographer. It states:

I would think this is a publication one could trust to get the details right about cinematography.

(Thanks for the correction, TFN—one would think I've stared at the pages of Variety enough throughout the years to remember this correctly.)
Top

Thank you for the additional references. I’d mostly seen 1.66:1 used in European films of the period and relatively uncommon among US films, hence my skepticism about it “accidentally” ending up in that ratio on home video (which would favor a 1.78:1, 1:85:1, or 1:37:1/1.33:1) from an American studio releasing an American film. The documentation clearly establishes a different story. Curious that MGM/UA should get it wrong.
Top
Post Reply
19 posts • Page 1 of 1

Return to “BFI DVDs and Blu-rays”