A site update will be performed Friday night, around 9:00pm PST. Forum may be unavailable for a few hours.

Discuss DVDs and Blu-rays released by Criterion and the films on them. If it's got a spine number, it's in here. Threads may contain spoilers.
Post Reply
31 posts
Message
Author 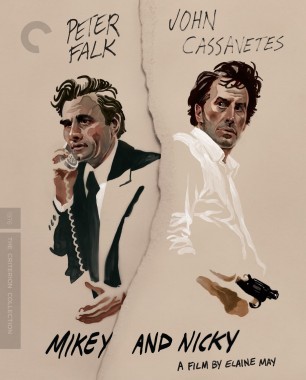 Elaine May crafted a gangster film like no other in the nocturnal odyssey Mikey and Nicky, capitalizing on the chemistry between frequent collaborators John Cassavetes and Peter Falk by putting them on-screen together as small-time mobsters whose lifelong relationship has turned sour. Set over the course of one night, this restless drama finds Nicky holed up in a motel after the boss he stole money from puts a hit on him. Terrified, he calls on Mikey: the one person he thinks can save him. Scripted to match the live-wire energy of its stars—alongside supporting players Ned Beatty, Joyce Van Patten, and Carol Grace—and inspired by real-life characters from May's childhood, this unbridled portrait of male friendship turned tragic is an unsung masterpiece of American cinema. 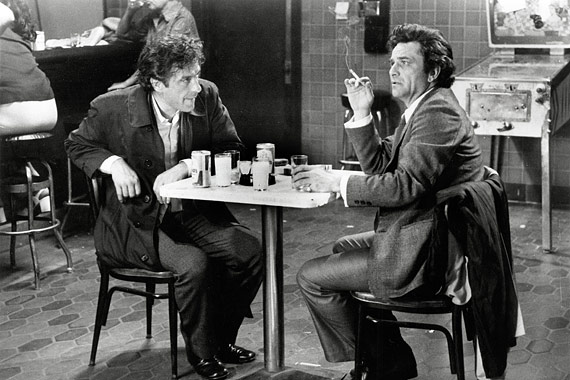 Well, while this film is alluded to in several posts there is no actual Mikey & Nicky thread that I could discern so I decided to start one. I just picked up the HomeVision DVD (1.85 : 1 aspect ratio, extra feature interviews, etc). Not having watched it in about 10 years I wondered if it still holds up as a classic example of ad hoc filmmaking. Ok, perhaps that's not fair, but I don't know that you'd find many members of the crew for the film in complete disagreement. Be back with new impressions...

Can't address the film itself as I've only seen it once on HBO about 25 years ago. However, your mention of the ad hoc nature of the filmming and the crew brought to mind an old anecdote. I recall that my old boss Bobby Visciglia once told me that months after the film wrapped (or rather shooting was abruptly curtailed) he was driving along a downtown L.A. street and recognized Peter Falk working with a skeleton crew. He pulled over to say hi and ask what he was working on. Falk just shrugged his shoulders in his inimitable style and replied, "Reshoots on MIKEY AND NICKY, what else?"
Top

What does "ad hoc filmmaking" mean?

I bought the dvd back when it was released (based on Dave Kehr's strong recommendation). The liner notes go into detail about the film's troubled history, including May hiding reels of footage with her analyst b/c the studio was demanding that she release whatever she had. And apparently Cassavetes, Falk and May wrote, rewrote, and rewrote the dialogue over and over.

I thought it was a very engrossing film--it took awhile for me to get into, but at some point I was hooked, and the end is fantastic.
Top

That just means using whatever means you have at your disposal to properly serve the moment at hand. Moreover, in this case, it means going to great expense in terms of time and energy in order to get to the essence or truth of each scene so that it has resonance far behind its own confines. The friendship between Mikey and Nicky is specific, but in deeply exploring the specifics May and company illuminate issues we all go through in our relationships. Naturally it's in retrospect that I used the term ad hoc, learning only after I'd seen the film of the lengths that the cast and crew went to in order to nail the scenes. The film thankfully doesn't feel ad hoc (though there are some obvious signs). It's a great experience - but one that is earned through a decidedly improvised, cut-and-paste, rather on-the-spot kind of resourcefulness. But don't get me wrong, this rawness, especially given the grittiness of The Village, New York circa 1976, is a salient feature.

But exactly WHERE was that black bar?

Heads up, MoMA is screening that on Wednesday, Aug. 8th at 7pm.

It's part of their 'recent acquisitions' program, so I'm guessing it's the same print they showed last fall as part of their restoration festival, so it should look as good as this film can look.

FWIW, Elaine May actually gave an introduction to this film at the restoration festival screening - sizeable crowd, but I was surprised it wasn't a full house since it showed at their smaller theater (same one as this screening). Anyway, she was very funny and gave a wonderful, detailed introduction, wish someone filmed it. I remember the details, but I couldn't do it justice, the delivery was what made most of it funny.
Top

Any status on this film being given a physical blu-ray and DVD release from Criterion? Any rumors? News? Speculations?

This is one of my favorite films of all time, and I would love to own it with all of those famous Criterion supplements.

I know Elaine May has had a phantom page on Criterion's website for a while, but I am not sure if it is because they only have exclusive rights to license the film through streaming services, or if maybe they have had it in their backlog for so long they have completely forgotten about it.

Any ideas or anything would be greatly appreciated!
Top

So this looks like it'll be released sooner rather than later. Nathan Rabin says that he's writing the liner notes for the blu-ray.
Top

albucat wrote: ↑
Mon Aug 20, 2018 6:19 pm
So this looks like it'll be released sooner rather than later. Nathan Rabin says that he's writing the liner notes for the blu-ray.

Did he say he was writing the liner notes on social media, or somewhere else?
Top

Weird they couldn't get an interview with May. She'd be a great subject and there's a lot to talk especially since I doubt they release her other films.
Top

I'm assuming Criterion forgot to put the "Essay by Nathan Rabin" in the special features list, or...?
Top

knives wrote: ↑
Mon Oct 15, 2018 5:12 pm
Weird they couldn't get an interview with May. She'd be a great subject and there's a lot to talk especially since I doubt they release her other films.

I'm not surprised given that May hasn't been interviewed for any release of her films, including the old Home Vision DVD of this and the Olive and MoC editions of A New Leaf. My assumption has long been that she just prefers not to do so for whatever reason.
Top

The film sounds right up my alley but I've become apprehensive around things like this as my familiarity with this film comes entirety from Ray Carney fanatics who propped this up as ambrosia that fell from heaven. Hyperbole surely but is it any good?
Top

If you like the films Cassavetes directed, you'll probably like this. It has little in common with May's other films as director, all of which I think are miles better than this
Top

It's very great; I prefer May in her less grounded mode (A New Leaf, Ishtar) but this remains very closely keyed in to Falk's and Cassavetes's mindset through the whole film.
Top

domino harvey wrote: ↑
Mon Oct 15, 2018 5:58 pm
If you like the films Cassavetes directed, you'll probably like this. It has little in common with May's other films as director, all of which I think are miles better than this

I don't particularly like Cassavetes, call me an agnostic I guess, but I love this film and think it is great having exactly the things he lacks.
Top

While I haven't seen the film and don't know much about it, I'm mainly excited due to the fact that it's another film from Paramount. As far as I know, they haven't released something from them in a while. Hopefully, this mean there's a new contract with them and it leads to more and better films.
Top

This was already released by HVe, so technically the rights have been with Criterion for quite a while
Top

knives wrote: ↑
Mon Oct 15, 2018 7:22 pm
I don't particularly like Cassavetes, call me an agnostic I guess, but I love this film and think it is great having exactly the things he lacks.

I'll second knives's assessment. I've tried to get into Cassavetes, and it just doesn't work for me. (That's not the same thing as saying he's a bad director or whatever, just that this style is lost on me.) I really liked Mikey and Nicky a lot, though. Perhaps the constantly rewritten dialogue works better in the service of the narrative? Anyway, as I wrote above, it took me awhile to get into it, but the film feels real and lived in, while Cassavetes's work sometimes feels like an improv experiment with a 2.5-hour running time.
Top

I'm somewhat the opposite. I spent my late teens and early 20s applying myself to Ray Carney's scholarship and critical preferences, and I adore Cassavetes. Carney ranks this as one of the top 10 movies of the past 50 years in his Sight & Sound ballot. But--I can't make heads or tails of this movie. All the complaints commonly lobbed at Cassavetes... that his movies are indulgent actor's exercises, muddied in narrative, etc. seem to me much more applicable to this one. If Elaine May's other films are way different from this, count me interested.
Top

Gerald Christie wrote: ↑
Mon Oct 15, 2018 7:55 pm
While I haven't seen the film and don't know much about it, I'm mainly excited due to the fact that it's another film from Paramount. As far as I know, they haven't released something from them in a while. Hopefully, this mean there's a new contract with them and it leads to more and better films.

My guess is this is actually licensed from Westchester Films, as it was a Castle Hill production and Westchester now owns a good chunk of that catalog.
Top

Tough crowd. I adored this movie ever since I first saw it - I was pretty new to Cassavetes and had never seen anything Elaine May had directed, but I recall being struck by the odd rhythms and how wonderfully and hilariously eccentric they seemed to be. But most importantly the core friendship between Falk and Cassavetes really stayed with me - it reminded me of people I knew in life, and there's rarely a week that goes by where I don't think about Falk and Cassavetes's conversation about shared memories (and what happens when Falk returns to the conversation with his wife). Those scenes make the ending feel all the more devastating.
Top
Post Reply
31 posts